There are so many great memories from this summer - old friends, new anchorages, new experiences, lots of fish, lots of breakdowns and lots of making due. We swam with whale sharks, beached our boat, speared large fish (just not as big as Ethan's!), made new friends, and read tons of good books. We saw thousands of dolphins, hundreds of whales, and more beautiful sunsets and shooting stars than I ever saw previously in my life. Here is just a recap of some of the highlights. 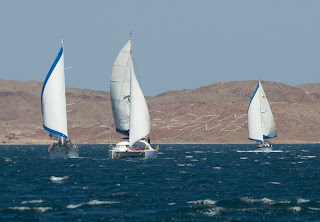 The Great Race - our very first time actually trying to sail fast enough to beat someone else. I really didn't want to participate; I was scared to tell the truth. I still feel sometimes like we don't know how to sail, even though we've been sailing around two years now. But in the end, despite the broken camera and the pain of my felt-like-broken leg, I wouldn't have missed it for the world. What a riot! And next time I'm in a race, I'll make sure all the hatches are closed first.

Lots of fish - The new spear gun has earned it's purchase price in meals, that's for 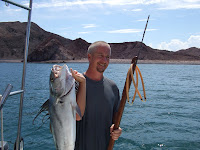 sure. And when you add in the entertainment value that Jack and Patrick had, then it's worth more than we paid. The Sea of Cortez is loaded with 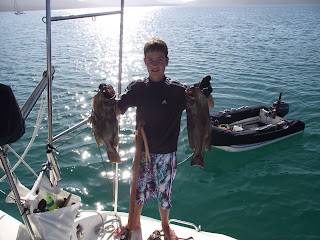 fish and we've enjoyed our fair share! We caught some of the fish the old fashioned way with a pole and hook, but the boys have had most of thier fun, snorkeling along with a spear in hand - selecting exactly the fish they wanted. 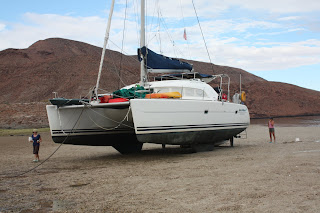 Careening!!! I still can't believe we did it! We have talked about doing it for about a year but had not seriously committed to it by picking a time or place. And then when we pulled into Puerto Don Juan and saw Java already up on the sand, it just seemed as easy as pie to follow suit. And it was surprisingly easy. But it just seems so WRONG to drive your boat up on the beach! All and all, it was a very cool experience and we will definately be repeating it as needed.

Great Anchorages, as always. We spent about ten weeks on the hook in the northern 1/2 of the Sea of Cortez. We re-visited our favorites from last year including Este Ton (pictured here) and Puerto Refugio. We also managed to explore some new anchorages including Alcatraz, Bahia de Hueso (Bay of Bones), Isla Salsipuedes, the Inner Harbor at San Francisquito, and checked out a few that weren't in any guide books. There are still plenty of others we haven't seen, and if we weren't so excited to explore the Inland Passage to Alaska, I'm sure we could spend another summer.... I say that now, but just don't remind me of the heat! Yikes, it gets hot down here. 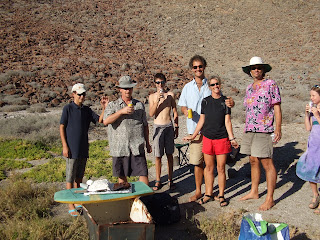 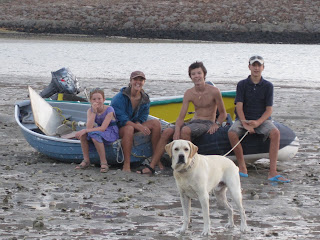 Friends - the best part of cruising. Maybe it's because we all made the same choice to leave everything and come out here, or maybe I just have more time to get to know people, but either way I have to tell you - I have never met so many people that I have bonded so easily with. We have all made so many good friends out here, and many of them feel like family. What a blessing. 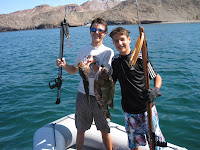