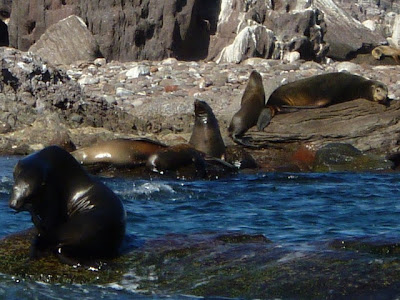 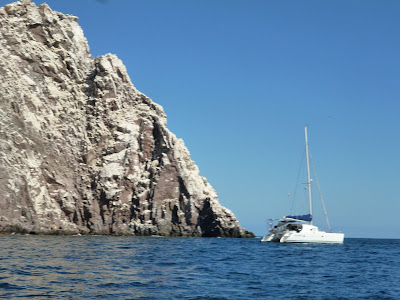 View to the north. 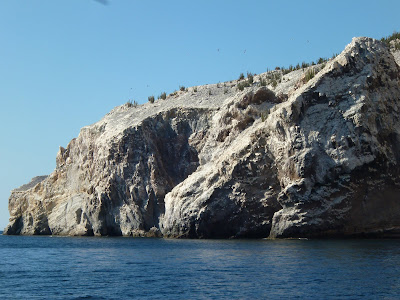 View to the south. 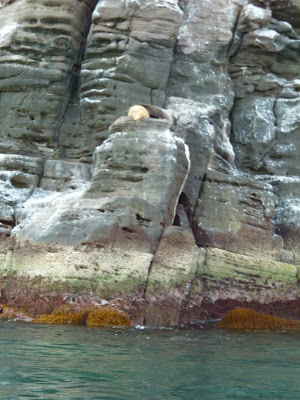 That little golden blob at the top of the rock is one of two sea lions about eight feet straight up above the high tide line. How did they get up there? 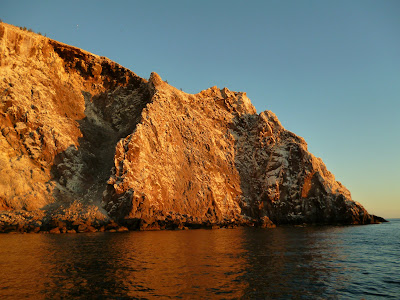 The glow of sunrise. As the sun starts to rise, the noise level goes up with sea lions calling greetings. 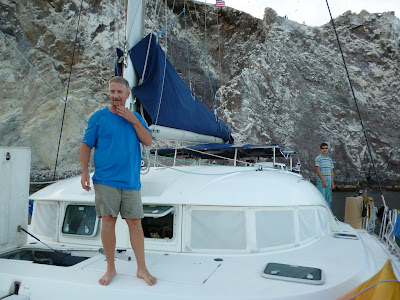 It's hard to feel cozy and comfortable when you are anchored this close to cliffs.

Isla San Pedro Martir is a tiny, remote island at the bottom of the Midriff Islands chain in the Sea of Cortez. Not many cruisers visit it primarily because it's out in the middle of nowhere and the island is basically a rock that rises straight up from the Sea into steep cliffs without any beaches. It does not really offer good protection for anchoring overnight. So why did we want to go there? Basically the answer is, "Because it was there."

San Pedro Martir has been designated a fish and bird sanctuary by the Mexican government. The steep cliffs offer home to thousands of boobies, gulls, terns, cormorants, herons, and pelicans. Huge boulders have calved off the cliffs over the years and provide excellent shelter for thousands of fish. (They also line the island and increase the hazards of anchoring.) Being so steep sided out in the middle of the sea, the currents swirl and upwell here, offering up a smorgasbord for fish, whales, dolphins, birds and sea lions. Hundreds of sea lions call this rock home.

We had coordinates on our GPS for an anchorage on the east side, but pulling up to the island, I was convinced they must be wrong. It didn't look like an anchorage to me! Sheer cliffs rose straight from the water and there was just a little indent to tuck into. There wasn't even a strip of beach. As we moved closer toward the anchorage, we found a sand bottom at about 37 feet close to the cliff. We set the hook and backed down hard because strong winds were forecasted to start the next day from the northwest.

Once anchored we had a chance to take a look around. And then another. The place was incredible. It overwhelmed the senses with all the bird and sea lion calls. The noise was constant and loud. The cliffs were so close and so huge, rising white with bird guano, straight up. It's hard to describe how strange and other-wordly this island seemed. It was like taking a left and ending up in Jurassic Park - you half-expected to see a pteradactyl winging around the cliffs.
The first night, sea lions played around our boat outlined in bright phosphorescence. They were so curious of Rudy. One sea lion swam around and around the boat on the surface with Rudy following, walking above him. Another tried to climb up onto our back steps, but got caught up in our swim ladder. We all three sat on the back steps and watched their antics late into the night.

I would never term the anchorage as offering good NW protection, as our guidebook suggested. We bumped, rocked and rolled the entire two days we were there. Sometimes the swirl of the currents was strong enough to hold us sideways to the 20 knot winds that were wrapping around the corner along with the swell. But even when we were nose into the winds, JaM was bobbling around in the confused swell. I got a little seasick at anchor when the high winds starting working up the swell. Sounds awful, huh? But it wasn't. The wonder and awe we felt anchored there outweighed the discomfort, at least for a couple days.
Posted by Just a Minute at 8:12 AM