In and Around Zihua

Zihuatanejo is a bustling, small town with a vibrant community. It is my favorite town on the Mexican mainland. I think it is the perfect blend of tourist-and-working town. The town square is the center of action and always has many Mexican families enjoying a wide variety of entertainment every day from basketball games and clowns, to art shows, dance troups and musicians. The Central Market is mostly about food, with none of the kitschy tourist stalls selling trinkets and T-shirts. In the large tourist area, the streets and sidewalks are beautifully paved with stamped concrete. Statues and flowering plants are liberally scattered throughout, and the stores are pretty, clean and uniform. There are many quality stores selling regional artwork at fair prices. Coffee shops stocked with local coffee and restaurants in all price ranges are everywhere. As I said, there's somthing for everyone in Zihua. Below are a few highlights from our time here. 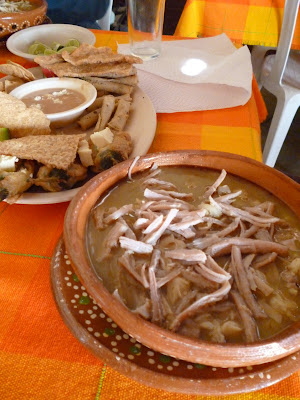 Patrick, Meri from Hotspur and I went to a pozoleria (a restaurant specializing in pozole) yesterday. Santa Prisca is open only one day a week from 2pm to 8pm and they mainly serve pozole. Your pozole can come with either a green, red or white broth with the choice of pork or chicken. Pozole is a stew made of hominy and meat dating back to pre-Columbian times. It was a meal used in Aztec rituals - after they sacrificed humans they chopped up the meat and served it in pozole for the community to share. Now they mostly use pork. Judging by the packed restaurant, it is still a favorite dish in Mexico. 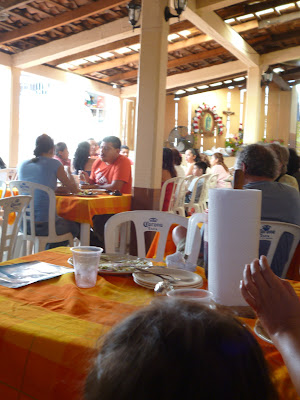 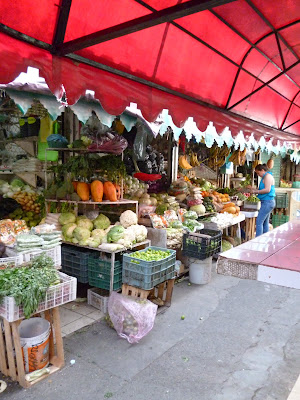 Just one of the hundreds of fruit and veggie stands in and around the Central Market. 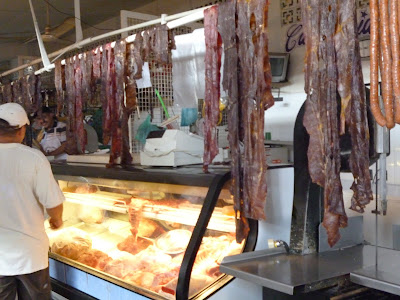 This market had a few things I have never seen in other central markets in Mexico. For one, most of the butchers have these long strips of thinly sliced meat and coils of sausages hanging on bars above their meat counters. Another new twist were the dozens of pollorias with their stacks of unrefrigerated, plucked chickens with their heads (and often feet) still on. 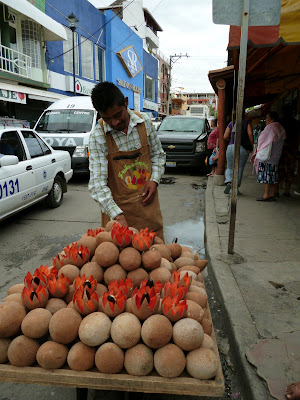 The blocks surrounding the Central Market are filled with even more vendors, stalls and people selling even more veggies and meat. This man was selling mamey from a wheelbarrow. Mamey is a tree fruit that is indigenous to southern Mexico. Its brilliant orange-red flesh is like a very sweet, very creamy cooked yam

Just one of dozens of charming hotels. 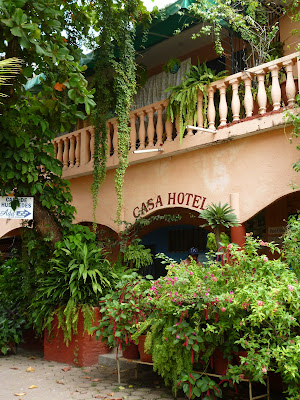 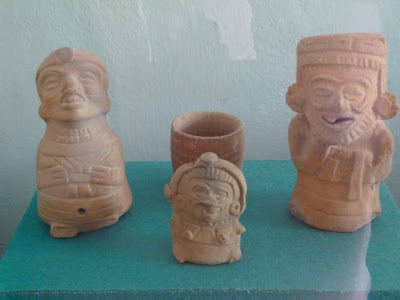 The archeological museum in Zihuatanejo is small, but very impressive. Six rooms hold many, many artifacts found right around the hills of Zihuatanejo and surrounding regions. There are many artifacts from several different cultures over hundreds of years. 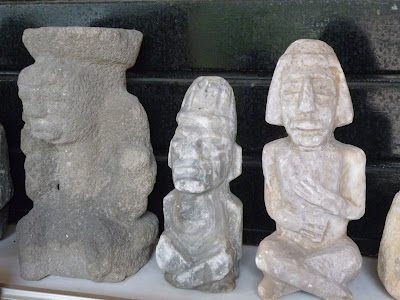