The Second Trip to La Guarda 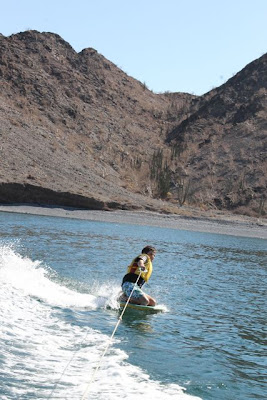 Jack skurfing at Refugio behind Eyoni's super fast dinghy with its new 15 hp engine. We had a lot of fun with Eyoni and when it was time to head south we realized that we might not be seeing them again. They are headed south on a faster track than us and plan to be leaving Mexico headed to Central America by the first of the year. 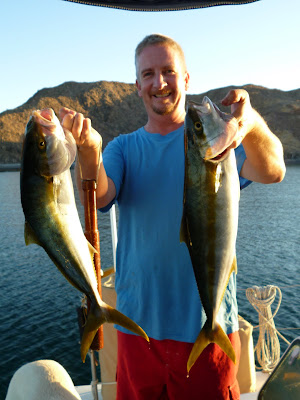 Yellow tail caught on a fishing pole. In fifteen minutes you could catch more fish than you could eat up in Refugio from your dinghy. 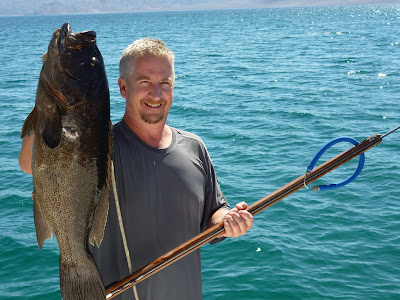 Patrick's "Fish of the Season" spearfishing, nabbed at Pulpito. The fishing this summer has been phenomenal in all venues - spearfising, and pole fishing from the dinghy and the big boat. 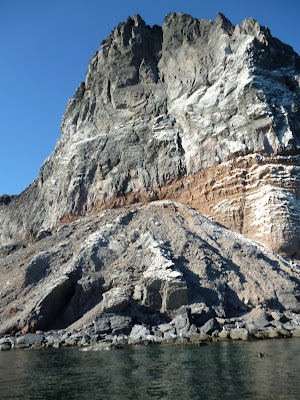 Pulpito, the east side of la Guarda. At the base of this cliff, we found some of the best snorkeling we've seen. It was a undersea garden with lots of soft corals, sea turtles, schools of BIG grouper, and even a sweet female sea lion and pup who swam circles around us. What a great experience!

So all the way back on October 12th, I was telling you that most of the boats had left to head south, but Eyoni and Just a Minute were headed north for one last trip to Refugio. The north winds finally subsided and the next day the two boats were pulling out of LA Bay village near dawn and headed north. It was a great motorboat ride with the spring tdes pulling us north on strong tidal currents. We were doing 7+ knots on one engine! Along the way we saw a pod of Orcas. Eyoni saw them much closer than we did and even had one "bump" into their boat - something I was glad not to experience. I know from all our dealings with Orcas in the Northwest that they are very aware of their surroundings, that bump wasn't an accident! Eyoni has fantastic pictures of the Orcas on their blog so check it out from my blog list.

I don't know how we got so lucky, but our second trip to La Guarda was also blessed with perfect weather. For days, we saw little wind from any direction. Our two boats enjoyed the deserted playground of Refugio for about a week and then moved around the east side to Pulpito for a couple more days of fun. Then the winds began to pick up and we started our move south, reluctantly
Posted by Just a Minute at 7:12 AM