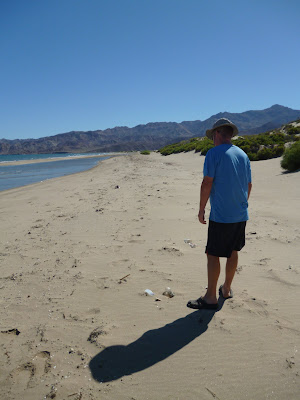 The beach near Islotes is about 2 to 3 miles long, with beautiful sand, and very shoal so at low tide the beach is enormous. It took us days to walk all the sections between the three estuaries. 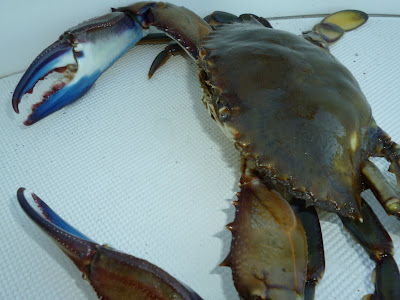 Blue Crab caught in the Islotes estuary. No one seems to be harvesting these lovelies and so there were many, many large guys running around.
We've spent three years in the Sea of Cortez and some people might wonder if we are bored stiff from seeing the same old same old. I have to tell you that this summer proved to us once again that the Sea of Cortez is worth a long visit. We just returned from a week spent in a new (for us) anchorage that quickly vaulted to my second favorite place in all of the Sea of Cortez. It's amazing to think that even after three years, we are finding even better places to drop our hook.

Everyone's idea of an ideal anchorage is going to be different. The reasons why I loved Punta Islotes in the south end of Animas Bay are numerous. First there is about a two mile long stretch of perfect sand beach that is the lee shore for norther storms - which means that there are tons of interesting items to find on the beaches. Jack found nine rapalas, and we saw many turtle shells, turtle nests, great shells, dolphin skulls and bones, coyote skulls, bird bones and other interesting things. Second, there are three separate, extensive estuaries with lots of bird life, clams and fish. Third is that few people come here. Fourth is that there are just tons of big, blue crabs running around. Rudy became a great crab-catching fiend and it was fun to see him snorkel his head under the water and come back up with a big crab in his mouth. We spent six fun packed days in Islotes and celebrated Jack's birthday there along with our friends on Hotel California. I thought that our circumnavigation around La Guarda was as good as it was going to get this summer, but our time at Islotes will always be a treasured memory.

A seven day northern blow is just subsiding now and we are gearing up for one last trip in the far north SoC before heading south with everyone else. Most of the boats have left already and are miles south. The ten that are left in the area are mostly gearing up to leave today or tomorrow. I know of only two boats (Eyoni and us) that are planning another trip north. We plan to leave tomorrow or the next day and head up to Refugio for one last visit. Then we'll turn our bow south and head for Santa Rosalia without stopping again in LA Bay - which means that you won't be hearing from us again until we are in Santa Rosalia in a couple weeks. Take care everyone. I still can't get any pictures uploaded, so I will have a ton of pictures on the blog when I get to SR.
Posted by Just a Minute at 9:42 AM