A Brief Recap of the Last Few Weeks 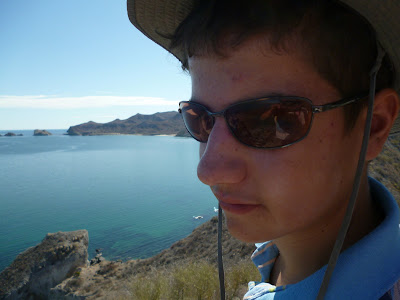 Hiking the hills of San Juanico

Our stay in Conception Bay was much longer than anticipated for two reasons. First the winds this winter in the Baja have been coming fast and furious, with lots of strong blows and just a few days off in between. Santispac Beach in Conception Bay offers fantastic protection for north winds and so we were very comfortable during many days of high winds. The other pull of Santispac is Lupe’s Paradise Resort Bar and Restaurant (formerly known as Ana‘s). We’ve been stopping in at that restaurant lots of times over the last three years and have always had great meals and lots of fun. The owners, Russ and Lupe, serve up good food and it’s a popular hangout for local ex-pats and vacationers. On Saturday nights, Russ throws a Dinner and a Dance that is a lot of fun. We went to two of those and felt like kids again, dancing up a storm. At 44, I was one of the youngest women in the bar and so I had lots of willing dance partners and Patrick didn’t have to dance as much. A win-win for both of us. There are so many retirees in the Conception Bay area, that the place was packed with them. I highly recommend Russ’s Saturday night dinner if you are down that way!
Finally another weather break came and we traveled down to San Juanico to rendevous with Hotspur. We hadn’t seen those good folks for about a year, so we were all looking forward to catching up. Tim is the first teenager that Jack has even seen in the last eight months, so he was very happy to meet up with them. We only had one day together before Hotspur left the anchorage headed north, but we fit in two games of Scrabble (she beat me horribly the first and I redeemed myself the second), hours of skurfing, and a potluck dinner with Hotspur and Lady Bug that night, which lasted until Cruiser’s Midnight (9 pm) when I kicked everyone off the boat. I would have gladly let the evening go on longer, but I had to get up in the morning and run the Amigo Radio Net at 7 a.m. and I knew I wouldn’t be able to if everyone stayed longer!
After two nights at San Juanico, we moved on down to the Puerto Escondido area, which is where we are now. We had wanted to spend just one day here, but our engine began acting up as we approached the harbor and now we will be here for a couple days while Patrick affects a repair.

Tomorrow happens to be the beginning of another strong blow. This coming Norther is expected to last four days with winds up to the high 30’s, so it looks like we will be watching a lot of movies, playing marathon games of Parcheesi, baking lots of goodies to heat the boat, and maybe do some hiking in the next few days. It’s getting really chilly down here with morning temps in the low to mid 60’s, and we’ve broken out our long pants, jackets and furry slippers. There have been several rain storms this winter (!) and we have seen more rain in the last month than all three years combined. Not having heat on the boat means we do lots of baking just to stay warm.
There are just a few anchorages we want to visit on our way south to La Paz, which means we should be entering that good city around the 10th of December, which will be the next time we get internet. 22 more days to Christmas!
Posted by Just a Minute at 2:59 PM