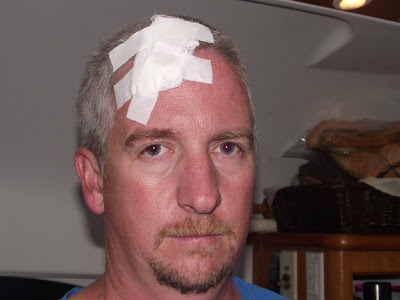 We’ve hung around La Paz longer than anticipated, first because there was no wind and then because there was too much wind. Unfortunately, any time you get high winds and lots of boats together, there is usually drama. This time around, Just a Minute’s captain took a starring role.
Our story starts a few days ago when a Norther blew into town. As Norther’s go, it was a pretty good one with a Gale Warning posted for the entire Sea of Cortez, and winds forecasted in the 30’s to 40’s.. Here in the La Paz harbor, we have some wave protection from a low lying spit of land, but no wind abatement. The first day, Thursday, we saw winds in the teens. Around 2 a.m. Friday morning, the wind started mounting and as dawn broke, the winds kept growing.
As I came up the stairs at dawn on Friday, I noticed a new boat anchored close to us with a dog running around on deck. As my sleep-numbed brain started to function I realized that the boat wasn’t anchored, it was dragging - right over the sand bar and moving past us. I knew we weren’t in danger, but there were several other boats in the downwind direction that it was moving toward. I put a hale out on the radio, to the fleet, warning of the danger. Then I woke up Patrick. I was very worried about this boat since the dog on its deck was obviously scared and there was no sign of the crew.
The seas were up about two feet and the winds were blowing about 20-25 knots so lowering the dinghy was a chore, but Patrick was soon on his way. He went to a nearby boat and asked that captain to jump in and help him. Christian, his fellow volunteer, was an excellent person to have along. He already had a spare anchor and rode lined up ready to use on the dragging boat. Together, they headed off to the dragger, a large ketch named Callisto.
Callisto was an obvious live-aboard with sun tarps up, lots of junk on deck, and the dog running around. At first Patrick and Christian just tried banging on the boat, trying to wake up the crew they assumed was on board. No one answered and the dog seemed friendly, so they tied up alongside and climbed on board. The boat was moving quickly now that it had passed over the sandbar. They found out that the dog was the only one on board. The boat had broken loose from its mooring ball, and so its anchor was on deck and ready to deploy. Christian threw the anchor over and started paying out chain.
Like most permanent live-aboard boats, this one had lots of junk scattered on deck. Patrick came up to the bow to help and when a wooden pole fell over and landed on the anchor chain, Patrick bent over to pick it up. As he leaned forward, Patrick put his head right into the spinning blades of a wind generator that was screaming along in the wind. The boat-owner had mounted the blades right over the anchor windlass at about 5 feet. It was sideways to Patrick and with the speed of the blades, he never even saw it.
All Patrick could do was sit down and try to cover the wound that was instantly pouring out blood. You know how head wounds are - it looked like a scene from a slasher movie. Of course it was an old wind generator with metal blades, so thankfully Patrick was not scarred for life, and did not lose an eye. It’s a miracle that he only has one, deep, 1” long gash, right at his hair line.
The anchor quickly grabbed and the boat (and dog) was saved just a few hundred yards from shore. With that rescue complete, it was time to rescue the rescuer. Thankfully we have lots of good friends in La Paz. Rich on 3rd Day reached Callisto just after Patrick hit his head. Once Callisto was secured, Rich took Patrick over to Hotel California. Rick on Hotel has a car and he drove Patrick off to the hospital for stitches and wound cleaning. And so another day comes to end with another good lesson learned - not every boat owner has a boat that’s safe to board. Who would put spinning metal blades 5 feet above an area that you have to access?????
Posted by Just a Minute at 7:03 AM